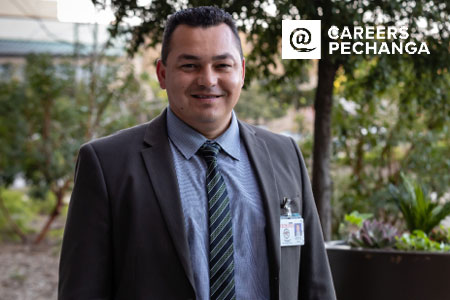 Alex Peña was destined to work at Pechanga, whether he realized it or not.

And yes, like many people who eventually find their way to their true way, it took him a while to recognize.

Every morning, on his way to Casino Pauma – where he worked as a server and lead server trainer while going to school for a business degree at Palomar College – Peña would drive past Pechanga. And every morning, he would see or hear what seemed to him be yet another example of Pechanga’s growth. He would listen to his brother, who worked there as a slot technician. He’d listen to various friends who worked throughout the resort/casino talk about how Pechanga was expanding, creating, doing.

The 2007-2008 recession and Peña’s innate skill for the restaurant business made the decision for him. In 2003, Peña had finally arrived at Pechanga, starting at the Pechanga Café as a server. By 2006, he was a supervisor of Kelsey’s, Pechanga’s upscale American pub. A year later, Peña was managing Paisano’s, one of Pechanga’s upscale restaurants.

Peña would go on to manage Pechanga’s two other upscale restaurants: the Seafood Grotto, which became Umi Sushi & Oyster Bar, and the Great Oak Steakhouse. And in 2017, he would get promoted to assistant food & beverage director of the entire property, where he now oversees a direct staff of nearly 200 out of the 1,500 food & beverage team members.

There, Peña’s relatable and proactive management style (“Why is it you’re on the job here? Whatever your motivator is, be honest with yourself and commit to what you’re doing…”) and a work ethic gleaned from his mother, a sous chef for numerous restaurants, taught Peña he can learn the restaurant business without having to run his own stand-alone restaurant.

That’s because at Pechanga, Peña has his fingers in every element of the restaurant business, from hiring, to budgeting, to menu planning, to coordinating with vendors, to overseeing three of Pechanga’s 13 restaurants, to playing an integral role in the installation of the Micros and Simphony computer programs.

“There’s never a dull moment. If you’re looking for growth and the potential to learn something new, Pechanga is the place to be,” he said. “I still am (learning). People are starting to pay attention to us. I’ve seen a lot of people in my career who have left and they want to come back. A lot. Everyone from chefs to managers to line level. They leave, do the circuit, and come back.

“Pechanga feels very much like home to me. I’ve never had the urge to see what’s out there and I know the community very well. I’m familiar with the area and I’ve never wanted to see what was out there because this place still has a lot of growth, a lot of potential and a lot of room for me to learn.”