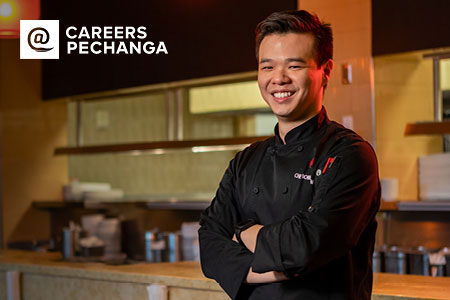 Bobby Cheng became chef of Blazing Noodles, one of 13 restaurants inside the west coast's largest resort/casino in August 2019. Before that, however, he was no stranger to the bustling restaurant that serves 2,000 guests each week. He spent three years overseeing the "front of house." He managed servers, bussers, restaurant hosts, helped guests arrange special menu items and ensured Blazing Noodles seamlessly served quality and excellent customer service starting in the mid-morning hours until 2:30 or 3 a.m. each day. In 2019, Bobby turned his attentions to the busy eatery's kitchen where he quickly injected more excitement and updates to the popular dishes, as well as hints of his Chinese grandmother's old world, intense flavors in cooking.

Cheng started out working in restaurants "from about the time I was old enough to peel shrimp, " he says. His parents opened a number of Chinese restaurants in Philadelphia's Chinatown and Atlantic City when he was young."We moved around a lot, maybe eight or nine times as a kid, and each time it was so my parents could get my sister and me to a better neighborhood. They opened four restaurants over the course of our moves."

And it was in those restaurants Bobby saw first-hand all aspects of running a successful dining operation. When three o'clock rolled around during his high school days, Bobby went to the restaurant to work the counter and take phone orders. It was like getting a degree in restaurant management without the university credits.

"When I did graduate from college with a degree in Business, I didn't know what I was going to do as a career. I did know the restaurant and hospitality industry and since we lived in Atlantic City, I ended up going into restaurant management for Caesar's Entertainment for about 6 months."

A short while later, a colleague of Cheng's who joined the team at the sprawling Foxwoods Casino about five hours away from Atlantic City called him and encouraged him to apply for a management role at Golden Dragon, a fine-dining Asian restaurant, at the resort. He accepted the job and moved north to Connecticut."Transitions are scary, but I like to see them as opportunities." Cheng worked there for 3 years.

When Pechanga Resort Casino, this time 2,935 miles away, came calling, Cheng once again saw the move as an opportunity for increased professional and personal growth. He was hired as Blazing Noodles' manager. By that time, he was 24.

He became a head chef at 27. When asked why he wanted to make the big jump from the front of the restaurant to the "heart " of the restaurant, he says, "I've always wanted to showcase Asian food the way I grew up with it as well as incorporate different flavors, essences, and have a team around me who are involved in creating great things with the same passion and enjoy what we do."

"I love (and he emphasizes love) classic American Asian food. The "authentic " dishes I remember from my childhood, it's so exciting to see how food adapts to its locale. That's the beauty of food I think. It's got its variances from region to region in China or Japan or Malaysia, but also in America. Chinese food will taste different in Atlantic City than it does in San Francisco and different again in Seattle or Chicago."

Cheng claims a big affinity to cooking food and the experience that comes with it. Recalling family dinners, he says people's minds, bodies and souls are fed all at the same time."That's what it was like at my house a lot of the time. My favorite dish from back then was my grandma's soy sauce scallion chicken wings. She'd make it for family gatherings. She was a constant in my life and taught me some important things about cooking. But she never let me in her kitchen."