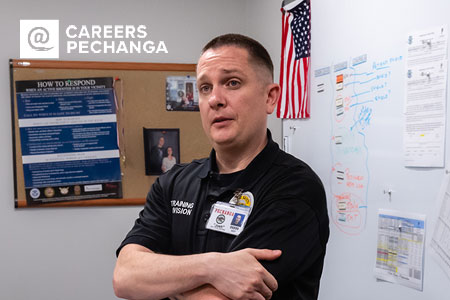 Anyone who’s walked by the North Team Member entrance, and by the one adjacent to the south parking garage may have glanced up and seen Josh Woolfolk’s face. One of 48 Team Members of the year in 2018, Woolfolk carries with him a long history in public safety that led him to where he is today – a fixture on the entryways, but also for the Team Members he trains.

“He has proven himself to be a hard-working and highly disciplined individual,” said Dan Bressler, Public Safety Training Manager. “He demonstrates professionalism and handles situations well by tackling them with grace and ease.” With comments like that, it’s not hard to see why Woolfolk was nominated and selected as a Team Member of the Year.

Bressler mentioned that he proved himself. Woolfolk started his Pechanga career back in 2003, thanks in part to his wife. But it’s not merely the years put in that define him professionally.

“She suggested I come over and apply,” he said. “She’s a locksmith now, but she’s worked in the cage, warehouse, maintainence, pool and now she’s a locksmith. From the beginning, I knew there was something special about this place. As time went on, you get to understand this is really a family environment. People are there to back you up. That comes from the top down – Lee Torres, Robert Krauss, all the way down. Everyone has everyone’s back. Everyone is trying to make this ideal the tribe has a reality.”

What Woolfolk knew Pechanga embraced back then, led him to enjoy his job as a public safety officer in DPS. Supervisors assigned him usually to Silk, the nightclub that formerly occupied the current bingo space, and the Comedy Club.

“There were some hairy moments, but I always knew I had the backup of my team, and I really relied on the training we had here at Pechanga.”

Enticed by other career opportunities, Woolfolk opted to investigate an internship at a substance abuse treatment facility. He became a counselor and says he helped people, some of them at the worst points of their lives. Following that, he took another security job, but came back to Pechanga in 2015.

“After working somewhere else, it opened my eyes. It showed me how streamlined and organized Pechanga was. The last security position I held, the organization wasn’t as professional as Pechanga and definitely not as family oriented.”

Woolfolk came back into the Pechanga fold as a public safety dispatcher. “Wow. We all have no idea how hard the dispatchers work. It’s really like being a police dispatcher in a small city. They are that busy and take all kinds of calls from all kinds of people in all states of need.”

He moved into the role of public safety floor corporal a year later. Continuing to show his dedicated work ethic and ability to move DPS in positive directions, Woolfolk was promoted again, this time to public safety patrol corporal. Last year, he moved into the job he says will keep him at Pechanga the rest of his life.

“As a DPS training specialist, the team and I come up with curriculum, and we facilitate and teach classes during the department’s academy sessions. The entire 300-person department is consistently kept up to date on everything that goes on at the casino. We learn about laws, arrest powers, drug and alcohol recognition, defensive tactics, and I could make this list go on and on.

I make it priority for myself, and I try to carry that over to my team - that it’s essential to always be better than you were yesterday. Improving morale, I believe in pushing someone to see their potential. It’s easy to get on the hamster wheel and do the same thing day after day and not contribute anything. I decided a long time ago I’m not going to do that. And if I have the chance like I do here, it’s up to me, and my peers around me to show others their opportunities.”

“You’ve never seen anywhere that treats their employees like we do. Gift cards, you’re kept in the loop, shown appreciation. You don’t meet people like you find here, and you have these awesome people all concentrated together.”