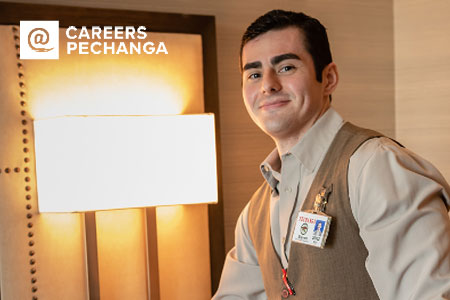 He wanted to wear a suit. That’s the first thing Steve Colgan told his new manager, Eric Pendon: that he wanted to trade a uniform for a suit.

“That was like a little joke letting him know I’m serious about being here and serious about my job,” Colgan said. “He encouraged me to keep trying and soak everything in.”

Colgan was working as a Pechanga houseman at the time, where his days were spent going into vacant rooms, stripping linens and bed sheets, taking out all the trash, dusting, vacuuming and taking out any in-room dining tables before turning matters over to the guest-room attendants for further cleaning. But even then, and even from the moment Colgan was hired at Pechanga in March 2017, he saw himself wearing a suit and being a supervisor.

It didn’t take him long. Colgan spent seven months as a houseman before being promoted to utility attendant, where he learned what true labor is. This promotion meant Colgan was now tasked with learning the intricacies of carpet cleaning and maintenance, which meant he was tasked with using the heavy carpet cleaning machines and learning the nuances of cleaning chemicals, as well as moving beds and desks around to ensure an even cleaning touch.

“They had openings and me, trying to move up the ladder, I instantly applied for it as soon as I could,” he said.

This was Colgan’s MO. He was going to work his way into that suit if it meant moving every bed at Pechanga and cleaning every room and suite. And it showed in the way he went about soaking up every bit of knowledge he could glean about the finer points of housekeeping.

It took two tries and eight months of working his corner of working the carpets for Colgan to get into that suit. He had applied once for a hotel supervisor position, only to fall short. But the encouragement he received from managers for that near-miss told him he was on the right path.

Finally, in June 2018, Colgan was promoted to hotel supervisor, where he oversees a houseman and four to five guest room attendants. He inspects the work of his charges, offers constructive criticism when needed and hearty pats on the back and encouragement when warranted.

All from a position of knowledge. Because Colgan has been there, done that.

Colgan has made it look easy, going from houseman to supervisor in 15 months, largely because of that attitude. He knows he belongs and he knows the sponge-like learning he’s used to get his current position is just beginning.

“I’ve already learned a lot of leadership skills: things that would come out of me out of nowhere about how to handle a situation,” he said.

“I see so many happy people here and I’m one of them. I always have a great attitude coming to work. I don’t dread it. I always see it as a positive thing working here.”

Including how he looks in a suit.